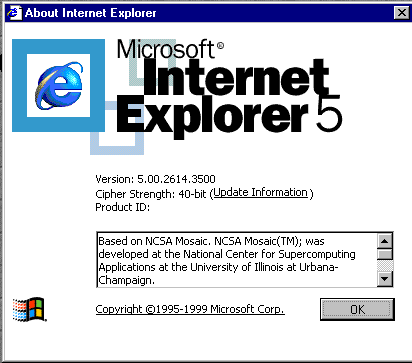 Release Date: March 18, 1999.
Microsoft Internet Explorer 5 (IE5) was a graphical web browser and one of the main participants of the first browser war. Its distribution methods and Windows integration were involved in United States v. Microsoft.


It is included with Windows 98 SE and Windows ME and it is the last version of Internet Explorer for Windows 3.1x, Windows NT 3.x and Windows 95.

IE5 presided over a large market share increase over Netscape Navigator between 1999 and 2001, and offered many advanced features for its day. In addition, it was compatible with the largest range of OSes of all the IE versions.

However, support for many OSes quickly dropped off with later patches, and Windows XP and later Windows versions are not supported, because of inclusion of later IE.

In September it was released with Windows 98 Second Edition. Version 5.01, a bug fix version, was released in December 1999.