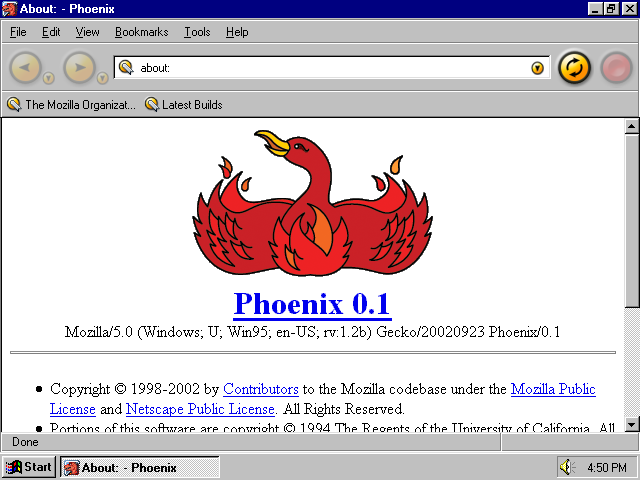 Release Date: September 23, 2002.
Phoenix is a redesign of the Mozilla browser component, similar to Galeon, K-Meleon and Chimera, but written using the XUL user interface language and designed to be cross-platform. It's a lean and fast browser that doesn't skimp on features.


Mozilla Phoenix is a free, cross-platform, graphical web browser developed by the Mozilla Foundation and hundreds of volunteers. Before its 1.0 release on November 9, 2004, Firefox had already gained acclaim from numerous media outlets, including Forbes [2] and the Wall Street Journal.

With over 25 million downloads in the 99 days after its release, Firefox became one of the most used free and open source applications, especially among home users. On August 15, 2006, Firefox had its 80 millionth download, about 10 months after the release of version 1.0.

The Bookmarks and History managers contain a quicksearch bar for quickly and easily filtering the list of bookmarks or history items. Quicksearch makes managing these lists faster and much more convenient.