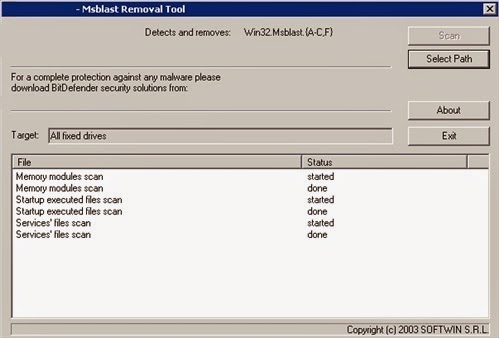 Release Date: September 4, 2005.
Due to the ever-expanding virus threats, security applications might not be able to fully clean your system and a dedicated program is required to perform this task instead. MSBlast Remover, will help you completely eliminate the W32.Blaster.Worm infection from your computer.


W32.Blaster.Worm infects unprotected, Internet-connected PCs, which use a Windows version older than XP, no matter the service pack levels. Windows 2000 and XP computers are most likely to be affected, since the worm has already been wiped out by an update on later OS versions.

This worm exploits the Windows DCOM RPC Interface Buffer Overrun Vulnerability in order to propagate on other systems. Although the damages it produces are not high, having the system crash repeatedly might become frustrating to any user.

W32.Blaster.Worm is known to automatically launch denial of service attacks against the Windows update website, thus preventing your system from getting the latest security updates. Furthermore, DCE implementations are likely to be vulnerable to these attacks.

MSBlast Remover’s interface consists of a single window, where users can monitor the scanning progress. Prior to running the application, it is advisable to create a backup of your system registry, in order to avoid data loss. If no traces of the worm are found on your system, the application displays a notification message.

If you experienced the above mentioned symptoms and think that your computer is infected, MSBlast Remover is worth trying, just to be on the safe side of things.