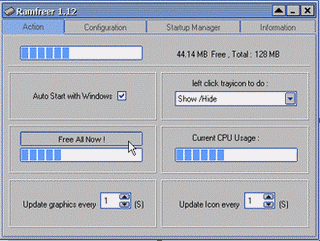 Release Date: February 9, 2003.
RAMfreer is one lightweight tool supposed to boost computer performance by freeing up RAM manually or automatically when certain usage levels are reached. The market is already full of similar software tools but RAMfreer is a bit different mostly thanks to its basic interface and the simple layout.


While the default setting opens or hides the app whenever you click on the System Tray icon, you can also configure it to automatically clean a specific amount of memory, thus boosting performance almost instantly.

The configuration screen enables you to set up the automatic optimization we were talking about, with separate fields to input the usage levels to be reached before launching the process.

Last but not least, RAMfreer also comes with a built-in startup manager supposed to provide full control over the items that run at Windows startup and thus make the operating system load a bit faster. Unfortunately, this particular feature doesn't seem to work on Windows 7, not even when launched with administrator privileges.

And speaking of the supported operating systems, RAMfreer works without a flaw on all Windows workstations and it doesn't hamper performance in any way.

All in all, RAMfreer serves its purpose in a pretty simple manner, while also being able to perform auto optimization based on user defined settings.