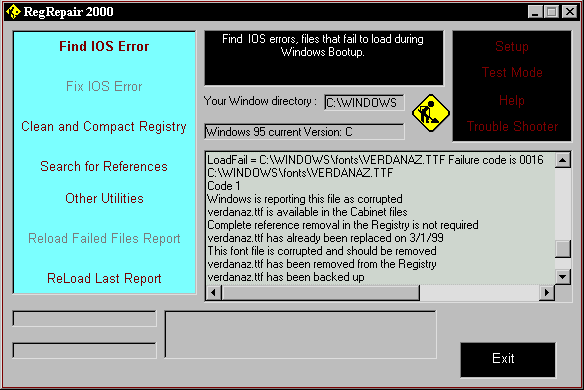 Release Date: March 7, 2003.
The only Windows Registry utility that repairs IOS errors conflicts and more. Now fixes VXDs. IOS means Initiating Operating Sytem and ERRORS means the stuff that messes up your Operating System, you know the stuff that makes you crash and get locked out of Windows indefinitely.


IOS errors are the messages you get at bootup, the failed to load files in the bootlog, and the corrupted font files that cause you to get locked out of Windows(which most people are unaware of).

RegRepair 2000 not only fixes IOS erros but also removes duplicate fonts, repairs and updates your system files and more.

IOS errors come from crashing your system, installing new software or hardware, even reinstalling Windows causes files to fail to load, or corrupts fonts and other files. Just take a look at your bootlog, you'll see a real mess there and you will have no idea how to start to fix the errors.

RegRepair 2000 is so simple to use it does it all for you, prompts you every step of the way and tells you what it is doing, why the file has an error and then fixes it (not like RegClean). In fact RegClean cannot do what RegRepair 2000 does.