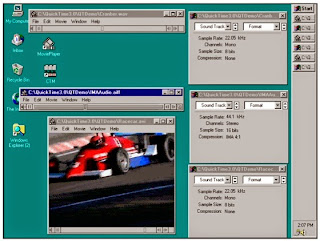 Release Date: March 30, 1998.
QuickTime is a full-featured media player and application framework that features support for all kinds of media types: audio, video, images and virtual reality movies. QuickTime plays two major roles in the multimedia business. First off, it’s a media player; it can be used for high-quality playback of the most important files.


The interface looks very professional, and it's easy to understand by both beginners and advanced users. It’s not the most complex media player in its category, that’s for sure. It offers you basic playback controls (play / pause / resume) that most players feature.

But QuickTime is linked with many web browsers. You have probably already found some websites by now that required QuickTime to play videos.

But the idea of using it as your main video player when there are others significantly more powerful than it may not be a concept that works for all users.

The second concept behind it (aside from being a media player) is that it acts as a multimedia architecture for third-party applications. In other words, software is being built on top of QuickTime, using its abilities for handling media content.

In conclusion, QuickTime is your usual media player. If you don’t use it for this purpose, you may be obliged to use it for a different reason, such as third-party software depending on it to be able to run.