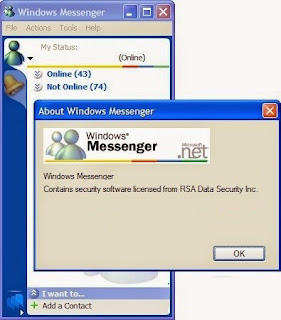 Release Date: July 22, 1999.
MSN Messenger started off life in 1999 as a rival to AOL’s AIM service. Both companies battled over chat dominance, and Microsoft engineers reverse-engineered AOL's chat protocol to allow MSN Messenger to sign into AIM, a process that AOL wasn't happy with when Microsoft first released its instant messaging client.


Over the years Microsoft added various features, including custom emoticons, the ability to play Minesweeper with friends, a nudge feature that would shake a friends chat window, and the super annoying winks option to send friends giant animated emoticons.

MSN Messenger is more than just text, it's a great way to collaborate with co-workers or touch base with family and friends.

You can even send an instant message to a contact's mobile phone. Customization features help you personalize your chats and make your connections even more meaningful.

This includes only basic features, such as plain text messaging and a simplistic contact list.[4] When it was first released, it featured support for access to America Online's AIM network.

America Online continually tried to block Microsoft from having access to their service until eventually the feature was removed, and it has not re-surfaced in any later versions of the software.