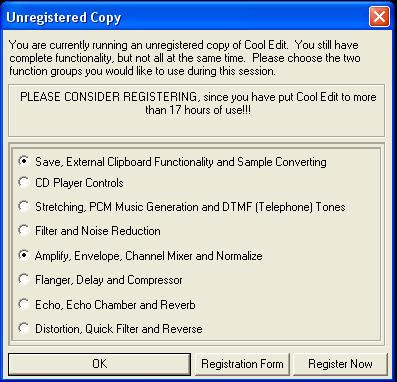 CoolEdit is an audio editor that has always enjoyed high popularity among digital audio enthusiasts, thanks to its powerful features, easy to use interface, and reasonable price. The versions featured here are among the first released. Back then it already featured interesting DSP effects and supported a nice list of audio formats: WAV, VOC, ADPCM, AIFF. CoolEdit kept envolving, and several versions were released: CoolEdit 96, CoolEdit 2000, CoolEdit Pro, Pro 2. In early 2003, Adobe bought the assets of Syntrillium (makers of CoolEdit) and started selling the software.

Cool Edit Pro is an advanced multi track sound editing program for Windows. It has the following
(but not limited too) main capabilities:

For example, the maximum number of tracks in a session has been increased from 64 to 128, with full track bussing (subgrouping) functions and, for the first time, a wide range of real-time effects, processing and equalisation on each track.

A rather welcome side-effect of all this new real-time processing is that the user no longer has to wait for Undo files to be created and saved, which increases the speed and immediacy of the program considerably.