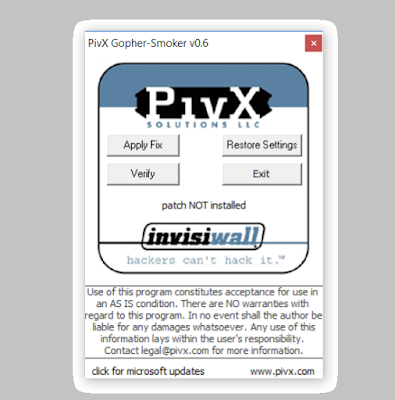 PivX Solutions, LLC released a program appropriately named 'Gopher Smoker'. It will fix the root vulnerability inside of Microsoft Internet Explorer (all versions) that will allow any hacker/cracker to take over your system without even clicking on their malice link. In the event you are not familiar with this insidious exploit, the vulnerability and it's danger to all computers running any version of Microsoft™ Internet Explorer™. Be certain of one thing, root access to your computer is your worst nightmare and a hackers dream, all at the same time.


Gopher was first discovered on May 22 by Online Solutions of Finland. (http://www.solutions.fi/) They did not release the exploit, but instead sent the code directly to Microsoft so that hackers could not exploit it.

They did the right thing by reporting the vulnerability directly to Microsoft, as opposed to eEye Digital Security who announced exploits to the world that allowed such viruses as Code Red to affect millions of servers worldwide in just days. However, neither of them took the tack that PivX did and that was to create a solution to the problem immediately.

Traditionally, Microsoft waits upwards of six months and releases a security package, including fixes for other flaws in their billion dollar software suites. PivX figured users shouldn't have to wait for a fix on this one.

And according to published reports in CNET and News.com, Microsoft is not going to be providing a patch for this exploit any time soon because they have been trumped by PivX.